Residents of the North Coast in Durban have vowed to keep the pressure on high-level politicians after protest action from residents in Tongaat and Verulam resulted in the return of water to taps.

Sivi Hemraj, a leader in Action Parkgate, which leads the community water issues, and Don Perumall, a leader in the Belvedere Civic Association, told News24 they would continue to put pressure on politicians to restore full water supply to ailing communities.

Both areas were hard hit after the April flooding, which left the vital Tongaat Water Works in shambles, cutting thousands off from clean running water.

Last week, well over 23 days after the floods first occurred, residents in Tongaat took to the streets in their thousands for a peaceful protest. They said the political elite had “abandoned us”.

Following this, there were interventions from top political figures, including the deputy mayor, Philani Mavundla, which has since gradually resulted in tap water supply.

Over the weekend, Mavundla and Premier Sihle Zikalala – who found himself in a PR disaster after a water tanker was spotted at his private residence while his fellow La Mercy neighbours struggled with no water access post-flooding – was finally seen in government issued pictures at the water works. 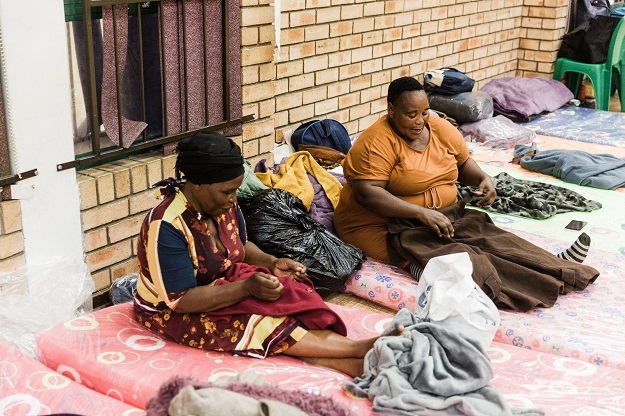 Displaced people from an informal settlement of Thuthukani, near Tongaat, take refuge at the Tongaat Community hall.
AFP Rajesh Jantilal

Zikalala has denied any wrongdoing after the tanker saga and has since met with the community.

The SA Human Rights Commission (SAHRC) is investigating the government as to whether there were human rights violations with regard to residents without water.

“The SAHRC has noted that the residents of Tongaat and the surrounding areas have been without water for approximately 24 days due to extensive infrastructure damage caused to the water treatment plant following the recent floods in the province,” the commission said on Friday, 6 May. They said they were concerned with the impact of the disruption of the water supply on local communities, businesses, schools and other organisations.

Perumall said that, while the community had now begun seeing water in taps, they would still continue to put pressure on politicians.

“I think some people have reached an understanding with the mayor coming and seeing water on tap, but the frustrations are still there and we don’t want to take our foot off the pedal with eThekwini. We have to keep pressure. Prior to this, politicians like Sihle Zikalala and head of water Ednick Msweli were not even seen.”

Hemraj spoke to News24 shortly after he opened a case of attempted murder against the police following protest action he embarked on with fellow residents on Friday, 6 May.

“We had water in our taps 30 minutes after a meeting with Philani Mavundla and Sihle Zikalala. How do you explain that? It was not their work, we had to put pressure on them to even come to us.”

He denounced police for shooting at residents, saying:

No one was armed. We wanted to bring officials forward to answer our questions because all our pleas were falling on deaf ears. There were no warnings or negotiations, they just erupted onto us. I was shot at close range [by rubber bullets], maybe a metre or 1.5 metres distance from the officer.

He said he was traumatised by the incident.

“I have not experienced something like that. The pain is unbearable. It is one of the worst things.”

That very day, in the afternoon, Hemraj and other residents again took to the streets.

“We did not back away, we proceeded with the planned action that we wanted. The deputy mayor, Mavundla, visited us the same morning after we were being told by officers that no one could see us.

“Shortly before, they told us Mavundla could not see us. He pulled up in his car, it was miscommunication from police on the ground. They were not honest with us.”

News24 reached out to Mavundla, who did not immediately comment.