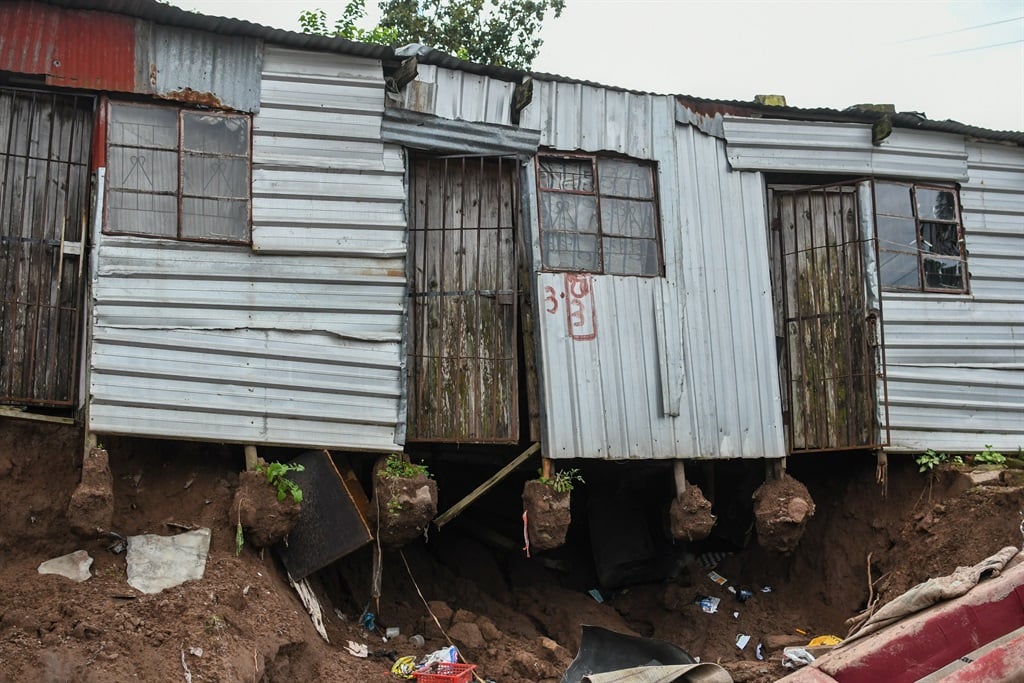 A shack sits precariously with its foundations washed away Clermont on 13 April in Durban. Darren Stewart

The unavailability of suitable land for adequate housing is due to stunted progress in urban land reform. This, in turn, is crippling the capacity of local governments to provide adequate housing in areas that are not prone to disaster, writes Hope Magidimisha-Chipungu.

This has been sharply illustrated in recent flooding in eThekwini (Durban), the port city in KwaZulu-Natal province, and its surrounding communities. The catastrophic flooding has claimed hundreds of lives and countless families have been displaced from their homes, worsening the dire housing problem many were already in.

The result is that a quarter of South Africa’s urban population is living in informal settlements. These are built wherever people find open spaces that are nearer to economic opportunities. They lack basic amenities and infrastructure, including proper roads and storm water drainage systems. This leaves their residents most vulnerable to the effects of climate change and changing weather patterns, such as floods.

Recently, new informal settlement have been developing on risky and environmentally sensitive areas that are prone to flooding and landslides, among other dangers.

Ethekwini is a case in point. The city’s geographic information system shows that some of the vacant land being encroached on by informal settlements falls under the 50- or 100-year flood lines. Flood lines physically demarcate areas that could flood within a certain time interval. The time interval is computed on average qualification and could be 50 or 100 years. Living within areas demarcated as flood lines is not only illegal but also very dangerous.

Flood lines are mainly demarcated along rivers and streams. They cover the river flood plains. In the recent torrential storm, streams were flooded, including their flood plains. Communities that are established in low lying areas and close to streams were the worst affected, along with those established on steep slopes. Areas affected have included Prospecton, Isipingo and Ntuzuma.

Now and again urban planners and researchers have sounded an alarm about the dangers posed by occupying the flood lines, be it in formal or informal settlements. However, when it comes to controlling the proliferation of informal settlements in disaster prone areas, law enforcement has been piecemeal.

Lessons that haven’t been learnt

Ethekwini municipality hasn’t applied lessons from previous incidents of flooding – in the region as well as more broadly across the country – into its planning. The area experienced flooding in July 2016, May 2017, October 2017, March 2019, April 2019 and November 2019. There has also been flooding in other parts of the country. In November 2021 the city of George was hit by floods. In January 2022 Ladysmith was hit by flooding while Gauteng province was affected in February 2022.

Yet eThekwini is still ill prepared to deal with flooding, especially in poor communities. As if poverty were not enough of a burden, poor people are bearing the heaviest brunt of flooding, worsening their vulnerable position in the city.

Short of relocating communities to safer areas, the city could, and should, have taken other steps by building capacity for low-income and informal communities living in high risk areas.

Steps should have included:

These strategies have been in used in a number of South Asian countries.

But the more sustainable solutions can be found in proper urban planning.

Urban planners have a key role to play in turning the grim situation around. They might not directly solve the root causes of climate change or sea level rise and flooding. But they can contribute a great deal to urban resilience and fortification measures to mitigate the impacts of flooding.

Well-designed urban spaces and interventions that are evidence-based can improve social, economic and environmental resilience.

Addressing complex urban challenges in an integrated way means developing solutions not only for one challenge, but also for urban poverty, inequality, climate change and urban ecosystems. The goal is to build livelihoods that are both sustainable and resilient.

This requires an approach that includes looking at all the hazards that could face an urban area, which sectors need to be involved and which stakeholders need to be roped in to ensure a solid foundation is put in place for building resilience.