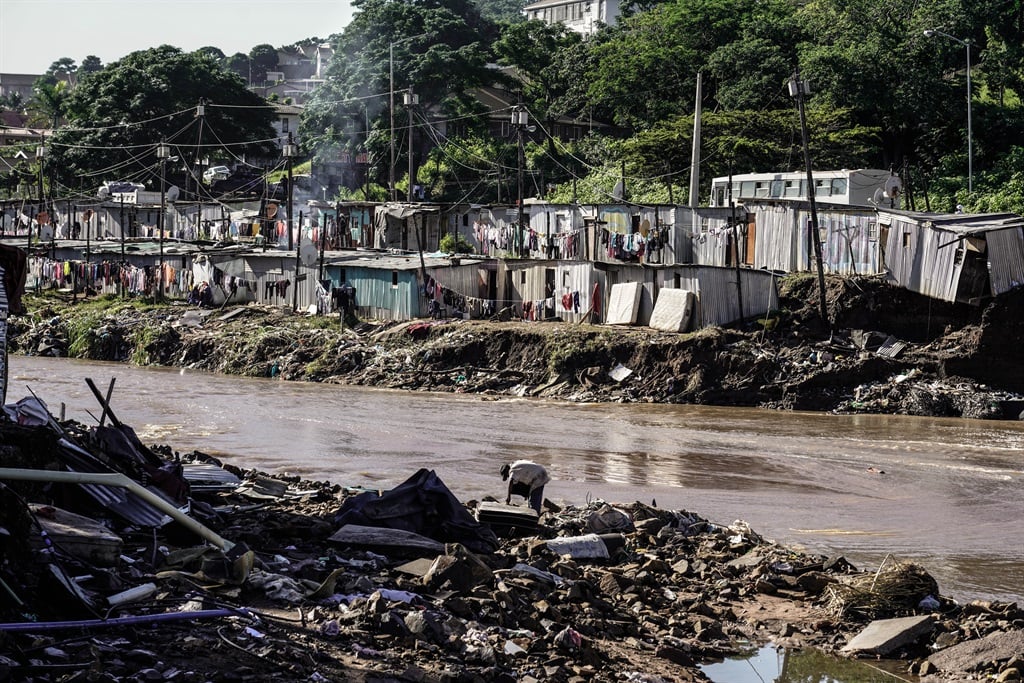 Over 400 people lost their lives in the flooding in Kwa-Zulu Natal.
Chanté Schatz/News24

Rainfall in KwaZulu-Natal that resulted in deadly flooding in April was made worse by climate change, a study has shown.

The World Weather Attribution (WWA) initiative on Friday released a study linking climate change to the intensity of the floods that caused over 400 people to lose their lives and damage to key infrastructure in the region. The WWA analyses the possible influence of climate change on extreme weather events. More than 15 climate scientists from France, the Netherlands, South Africa, the UK and the US were involved in the study on the KwaZulu-Natal floods.

According to Dr Friederike Otto, senior lecturer in climate science at the Grantham Institute, Imperial College London, who also worked on the study, the rainfall was exceptionally high for specific regions – more than 350mm over two days.

The study considered the rainfall in the affected area on the east coast of South Africa, which includes parts of KwaZulu-Natal and the Eastern Cape. The South African Weather Service previously noted that the rainfall was similar to that experienced during tropical cyclones. The study intense rainfall over the eastern coast of South Africa over two days in April.
Supplied World Weather Attribution

The study showed that human-caused climate change (brought about by greenhouse gas emissions) would make such an extreme weather event double in frequency or a one in 20-year event, explained Izidine Pinto, a climate scientist at the University of Cape Town and technical advisor at the Red Cross Crescent Climate Centre.

For a specific weather station – Mount Edgecombe – its data showed that such rainfall is a one in 200-year event.

The heavy rainfall event reflects how human-caused climate change works, the WWA noted in a statement. Greenhouse gas emissions contribute to rising temperatures, which means that the atmosphere holds more water and that risks heavier rainfall.

KwaZulu-Natal has the highest flooding event risk of any province in South Africa, according to Professor Tafadzwanashe Mabhaudi of the University of KwaZulu-Natal. Several parts of KwaZulu-Natal are likely to experience more frequent and severe storm and flood events due to climate change, Mabhaudi explained.

“The floods experienced in April 2022 are a stark reminder of the province’s flood risk profile and vulnerability,” he added. KwaZulu-Natal is also at risk of landslides due to its geography and other features of its land formation. “Communities are regularly caught unprepared by floods, leading to significant losses in life and property,” Mabhaudi said.

Early warnings for floods and storms would assist in increasing the preparedness of farmers and local disaster management officials, he said.

Professor Francois Engelbrecht, director of the Global Change Institute at the University of the Witwatersrand, similarly said that the country needs to improve its responses to such extreme events. “In the short term, the country needs to learn how to evacuate thousands to tens of thousands of people out of the path of harm within a period of one to three days, to give them safe accommodation even if just temporarily, by making use of early warning systems.”

In the longer term – vulnerable communities must be assisted with safer land to live on and be provided “proper housing” to resist the impact of extreme weather events.

“For as long as people are living along the steep hillsides of KwaZulu-Natal, they will be prone to the occurrence of mudslides during periods of heavy rainfall, and for as long as people are living below the flood lines of the rivers that transect the Durban area, the hard reality is that more lives will be lost in the future, especially in the context of climate change intensifying storm systems in eastern southern Africa.”
– Francois Engelbrecht

Commenting on the early warning systems that are in place, Vanetia Phakula, a meteorologist at the SAWS, explained that warnings of a severe storm were issued to the public on 8 April, ahead of the actual event, which took place between 11 April and 12 April. Closer to the time, the SAWS increased its alert level from 5 to 9 to indicate the increasing severity of the event, which would include flooding and mudslides.

But based on the responses to the alert, Phakula said it is clear that there needs to be more education around the alerts to improve people’s responses.